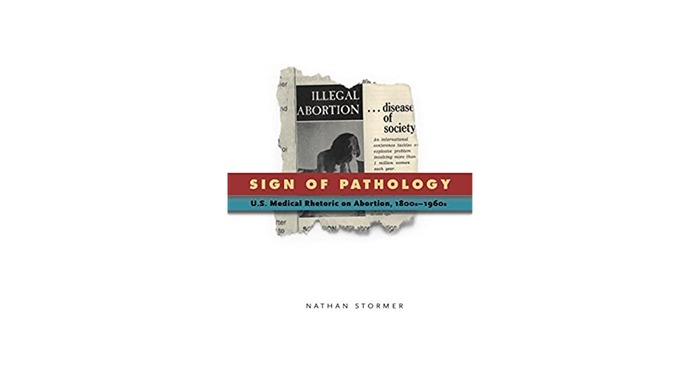 Much of the political polarization that grips the United States is rooted in the so-called culture wars, and no topic defines this conflict better than the often contentious and sometimes violent debate over abortion rights. In Sign of Pathology, Nathan Stormer reframes our understanding of this conflict by examining the medical literature on abortion from the 1800s to the 1960s.

Often framed as an argument over a right to choose versus a right to life, our current understanding of this conflict is as a contest over who has the better position on reproductive biology. Against this view, Sign of Pathology argues that, as it became a medical problem, abortion also became a template, more generally, for struggling with how to live—far exceeding discussions of the merits of providing abortions or how to care for patients. Abortion practices (and all the legal, moral, and ideological entanglements thereof) have rested firmly at the center of debate over many fundamental institutions and concepts—namely, the individual, the family, the state, human rights, and, indeed, the human. Medical rhetoric, then, was decisive in cultivating abortion as a mode of cultural critique, even weaponizing it for discursive conflict on these important subjects, although the goal of the medical practice of abortion has never been to establish this kind of struggle. Stormer argues that the medical discourse of abortion physicians transformed the state of abortion into an indicator that the culture was ill, attacking itself during and through pregnancy in a wrongheaded attempt to cope with reproduction.

“In Sign of Pathology, Nathan Stormer provides an original genealogical reading of the U.S. medical profession’s public discourses about abortion in the nineteenth and early twentieth centuries. Anyone who appreciates Foucauldian perspectives should find admirable Stormer’s precisely developed argument that these medical discourses ‘made the chaotic material conditions of abortion’s morbidity rhetorically capacious for biopolitics.’”—Celeste M. Condit, University of Georgia

“Nathan Stormer has written a stunning book, beautifully illustrating how rhetorical struggles over and through abortion have long been about situating ourselves—and pregnant women—in time and place. Civilization is recursive to the maternal body, with abortion positioned as a sign of collective disorder. It is precisely because abortion is a medicalized national metric that the issue is so intractable. Defined through biopolitics, abortion is perceived as a collective, irreparable wound, and ongoing political struggles reliant on familiar frameworks only deepen this intractability. Stormer’s elegant genealogy, both diagnostic and gently prognostic, has the capacity to shift how we see human reproduction and our place in it.”—Monica J. Casper, University of Arizona

“If your primary scholarship is in abortion rhetorics or historic American medical rhetorics, then this text is an indispensable and invaluable contribution to your area. Similarly, for those interested in rhetorical genealogy and/or rhetorical historiography, broadly conceived, Signs of Pathology is an exemplar text in the genre.”—S. Scott Graham, Rhetoric & Public Affairs