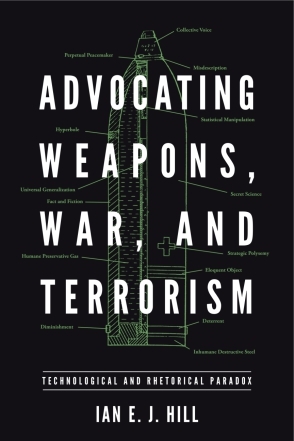 Technē’s Paradox—a frequent theme in science fiction—is the commonplace belief that technology has both the potential to annihilate humanity and to preserve it. Advocating Weapons, War, and Terrorism looks at how this paradox applies to some of the most dangerous of technologies: population bombs, dynamite bombs, chemical weapons, nuclear weapons, and improvised explosive devices.

Hill’s study analyzes the rhetoric used to promote such weapons in the nineteenth and twentieth centuries. By examining Thomas R. Malthus’s Essay on the Principle of Population, the courtroom address of accused Haymarket bomber August Spies, the army textbook Chemical Warfare by Major General Amos A. Fries and Clarence J. West, the life and letters of Manhattan Project physicist Leo Szilard, and the writings of Ted “Unabomber” Kaczynski, Hill shows how contemporary societies are equipped with abundant rhetorical means to describe and debate the extreme capacities of weapons to both destroy and protect. The book takes a middle-way approach between language and materialism that combines traditional rhetorical criticism of texts with analyses of the persuasive force of weapons themselves, as objects, irrespective of human intervention.

Advocating Weapons, War, and Terrorism is the first study of its kind, revealing how the combination of weapons and rhetoric facilitated the magnitude of killing in the nineteenth and twentieth centuries, and illuminating how humanity understands and acts upon its propensity for violence. This book will be invaluable for scholars of rhetoric, scholars of science and technology, and the study of warfare.